Creating a Resume that Recruiters Will Read

In this episode of The Purple People Leader, JoDee Curtis and Jeremy York discuss paid time off. They share their thoughts on PTO accruals, PTO rollovers, unlimited PTO, and PTO in lieu of pay increases.

This transcript was created using an automated transcription service and may contain errors.

Welcome to The Purple People Leader, where we discuss hot HR topics and we bring them here to you. So, JoDee, what are we going to talk today?

PTO stands for paid time off. It’s been around for a long time, but it – some… some companies do do it differently in terms of what’s included in the PTO, what’s not.

You know, I’ve always been a big fan of PTO as opposed to, like, separate vacation and personal time, and those kinds of things, because I think it allows people to utilize their time to the way they want. And it really does encourage people not to lie about “hey, I need to take a sick day,” when I’m not really sick.

Right, right. I love it, too. I was an early adopter for PTO.

Yeah. Yeah. So what do you think about, like, accruals with PTO? I know there’s a lot of conversation about how do we actually accrue time? What’s been your experience in working with clients and in places where you work?

Yeah. And by the way, you know, and I’m a former accountant, so accrual, I know, means something different to me than other people. But generally, an accrual is when people earn X number of hours a week or X number of hours a month, and then you can take the time off after you’ve accrued or earned that amount. So I will tell you, Jeremy, at Purple Ink, I just give it to people, the whole thing all up front.

Yeah. I like that. But you know, when you have a really big company and lots of people, if you’re doing that up front, and then they… they take four weeks of vacation in January and quit in February, you’re kinda screwed.

Right. Because that never happens, right? I know that I’ve worked at places where everyone got their PTO, all of it, January 1, and we had a large amount of terminations or people exited the organization within that first week of January, once they got their PTO, you know, into their bank. But I think the smart thing to do about those accruals is to have them where we can allow them to have access to all the PTO in the beginning, but then have an accrual at every month or every pay period, or whatever that cadence may be. I think that makes a lot of sense with all of that. But I do like the idea of having, like, a PTO bank that we have access to it at the beginning of the year, versus where some organizations say, “Well, you can only use what you earn.” Well, then if people haven’t really earned any time, they can’t take that time, and then we have everyone taking off a lot of time at the same time of the year once they get that…

…those accruals, right? So kind of counterintuitive or counterproductive, I think, at that point.

Right. And I just think it’s hard if you’re… say you have a family wedding in February, and you might not have enough time then to go, but not enough time to take the time off in December. So.

Yeah, I think that’s why it’s very important to have a very specific, detailed policy on how all of this stuff works, because people will question you on it. Certain things come up, so we have that detailed policy. I know when we work with our clients, we try to write that policy for them and then we develop those statements. Right?

And part of that policy has to do with a topic that JoDee and I don’t always see eye to eye on, which is rollovers. Right?

So I am… I am a big proponent of rollovers. I think, you know, allowing people to be able to roll over time into the next year, up to maybe like 40 hours or 20 hours is nice, especially if someone has, like, a big international vacation that they want to take or some kind of big event that they need some extra time off, where they can pre-plan it. But I also know that through an accountant’s eyes, that is not always something they want to see on the books. Right?

Right, right. So I won’t go into all the accounting details, but basically, you have… you would end up with a liability on your financial statements at the end of the year, because people have earned vacation that they haven’t taken yet. So part of it’s an accounting thing. But part of it, too, I just feel like it’s really important for people to take the PTO that they’ve earned. And it’s easy to say at the end of the year, I… you know, I don’t have time to take my PTO, so I’m going to roll it over. And then they roll it over again and they roll it over again. And then someone leaves your organization and you owe them, like, 300 hours of PTO, which can be a pretty big hit.

Well, and I’ve seen organizations that have allowed that. That’s why, you know, I think that when you write a policy you have, like, a maximum number of hours that you actually can accumulate at one point in time or have in the bank from that. So hey, let’s talk about another topic that I think is really, really hot and people have been talking about quite a bit lately, and especially now since we have a little bit more of this work from home component, which is unlimited PTO. You know, what’s your take on that? What is it?

So, what it is – The theory is, you know, some people, you’re working a lot of hours, depending on your… the industry you’re in, you might be very seasonal-oriented. And they’re saying, hey, you put in a lot of time early in the year, feel free to take time off as needed. You still gotta get your job done. Right? You still have to meet performance expectations. But if you need some time off, take as much as you want. I just think it’s a little dicey. Right?

Well, yeah, I agree with you. And I think what’s interesting is… is that while it’s meant to be kind of a reward, I think for those folks that are high performers, you’re going to see them not take very much time – right? – to be able to do that. And as you said earlier, the idea of PTO is to get some rest and relaxation, remove yourself from the workplace, get rejuvenated, you know, give yourself a mental break. And I don’t think you’ll see that. I think the folks that maybe aren’t your top performers, they’re the ones who are going to abuse it. And they’re going to say, hey, you know, we’ve got unlimited PTO, and I’m getting an average rating on my performance review. What’s the problem? So I am with you. I’m not the biggest fan of unlimited PTO. I know in some environments it’s a selling point. It’s a great concept and idea, but I don’t know that it’s for everyone.

Yeah, I think, too, that people just like to have a number. They like to know… I mean, I’m a… I’m a proponent of giving making the PTO hour accrual or allotment more. And then… but then people know I have 120 hours, I have 160 hours. Otherwise, I’ve seen people in organizations have unlimited PTO, and they’re like, how much are you taking, and how much are you taking? Because I don’t want to take too much. And so it just creates more confusion about what’s okay to take.

So you’ve got those people… you got more people who want to actually abuse it, right? Because, oh, I get all this, right? We’ve got the other people who won’t use it at all, because they’re, you know, busy doing other things. And then you’ve got the folks who will actually use it the way it’s supposed to be used. Right? So I always think that’s an interesting, interesting concept.

I love that analogy.

Yeah. So one other thing that I wanted to talk about that I’ve started to see happen in organizations a little bit more that I don’t know that we’ve seen in the past is PTO in lieu of pay increases.

So where we’ve had employees actually say, hey, I don’t want… I’d rather have more PTO than more pay. What have you seen running into that?

Yeah, I love that. I mean, it has to make sense for both parties, right? You can’t hire people and have a job to be done and certain expectations and then say, okay, you can be off six weeks a year, right? I mean, sometimes that might work, and sometimes not. But I do think it… especially coming out of COVID – or at least I hope we’re coming out of COVID – and that people have had so much more flexibility and they… they’re more… it’s more important for them to have this work life integration. And if that’s… if people would prefer that versus dollars, I’m in.

Yeah, I think that’s… I think it’s a great thing. But you know, I have to put my little HR and compliance hat on, think about the future of things, you know, about what does… how does that impact us when we start looking at our compensation practices, right? And about, you know, when we actually have compensation pay bands or pay grades, and how does that maybe throw those off? And how do we evaluate that with a person who’s in one role versus another? And I think that’s something we have to think about as we look at that.

So yeah, you get into those pay bands and comparisons, that it does make it different.

Well, and then I think about some of those managers out there that might say, okay, well, last year, you asked me to give you more PTO in lieu of a pay increase, but this year, your performance has been terrible, so now we’re going to take it away. And… right? I think about those. So people might say, oh, well, that works both ways. And I’m like, well, does it? So I think it opens up a door for a lot of discussion on how we actually handle this and what we do. I mean, I like the concept. I think, again, we are going to be moving forward to where everything is not cookie cutter, right? We’re gonna have to start making decisions based on a one-on-one, individual basis. But I will say that’s okay, as long as we’re being consistent in the way that we practice that. So, all right, well, I think we’re out of time. I think that wraps up our conversation today for our topic of PTO for The Purple People Leader. Join us again next time for some more insight on hot HR topics.

Emily is Purple Ink’s Director of Marketing. She enjoys being able to exercise both her creative side and her analytical side, and as a Learner, loves helping to create new services and tactics and discovering the best ways to share them with the community. 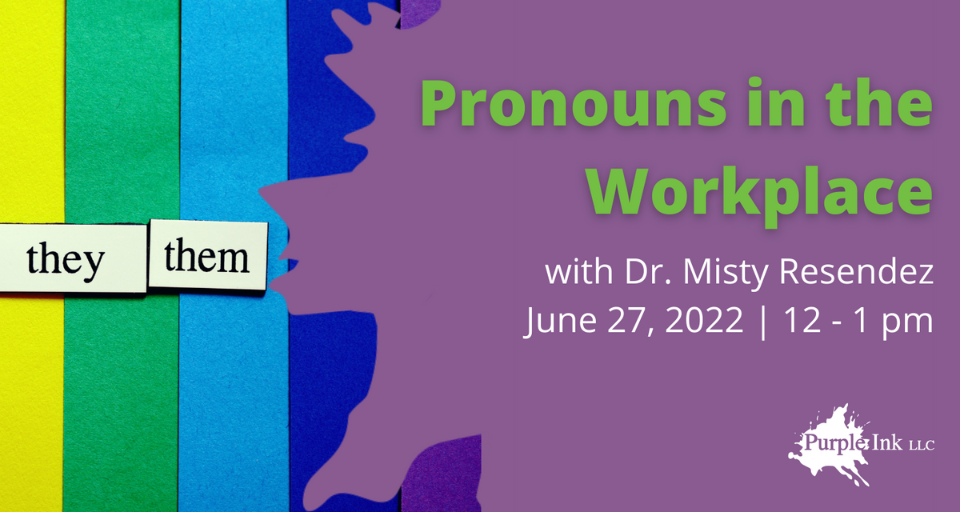 Pronouns in the Workplace Webinar 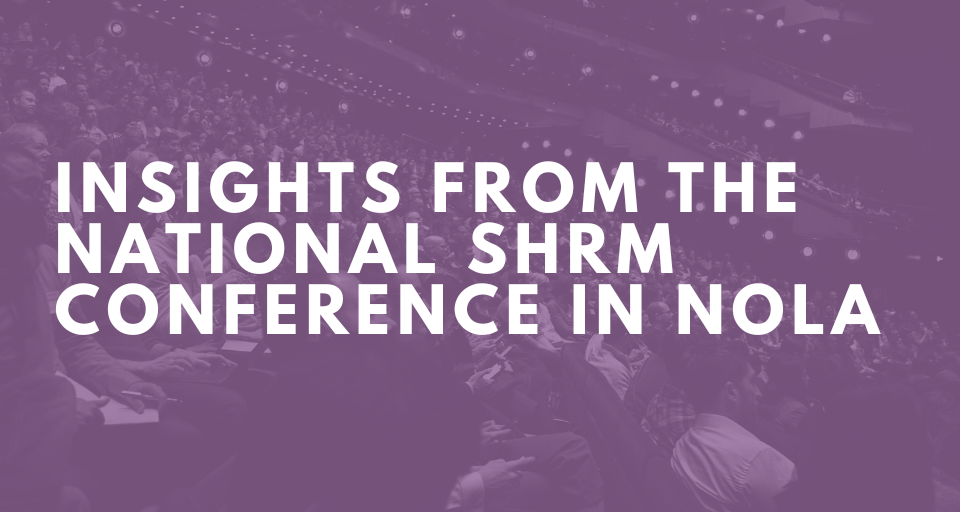 Insights from the National SHRM Conference in NOLA 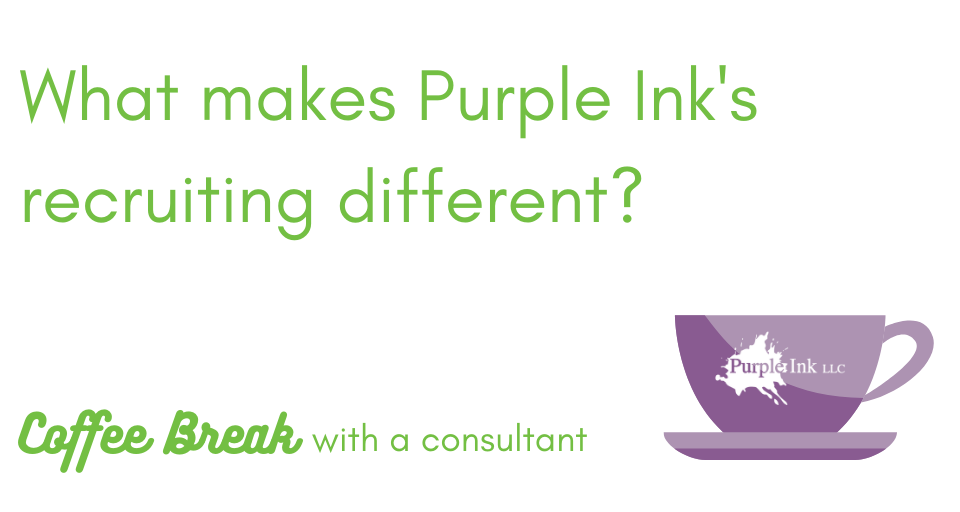